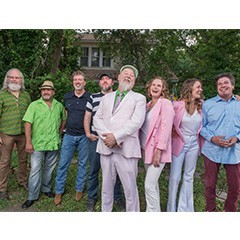 Once you’ve seen Shinyribs’ Kevin Russell on-stage and heard his band’s music, it’s impossible to forget him. Known for his outrageous outfits and antics, Russell is a regular Austin fashion icon, liable to turn up in anything from his lime-green sherbet leisure suit to a flashing LED cloak, which he donned for a soulful performance of “East Texas Rust” on the award-winning PBS show Austin City Limits.

Born and raised in Beaumont, East Texas, Russell has been dubbed (mostly by himself) the Baryshnikov of the Big Thicket, the Pavarotti of the Pineywoods, the Shakespeare of Swamp Pop or the Shiniest Man in Showbidniz. Balding with a scraggly beard and an unapologetic gut, Russell boasts the indelible spirit and nudge-nudge, wink-wink playful quality of a man forever young, who points to the likes of Tony Joe White and the Coasters for his rib-tickling, mind-expanding, butt-shaking “is he for real” sense of humor. As a member of The Gourds, Russell took his musical inspiration from the fertile Ark-La-Tex turf and became a pioneer of Americana.

Shinyribs is one of the music world’s best-kept secrets, but not for long. The eight-piece outfit was named Best Austin Band for 2017 and 2018 at the Austin Chronicle’s Austin Music Awards and their album, “I Got Your Medicine,” was tapped as Album of the Year. Shinyribs was also nominated by Black Fret in 2015 for a grant and was selected as a recipient.

About his status as a local hero, Russell says, “The competition is pretty serious here in Austin. I don’t know how big a fish I am, but I certainly flop around a lot.”

Kevin Russell might not take himself too seriously, but he is dead-serious about the eclectic blend of music he favors, combining Texas blues, New Orleans R&B funk, horn-driven Memphis soul, country twang, border music, big band swing, roots-rock, Tin Pan Alley and even punk into a raucous mix that includes such out-of-the-blue cover nods as David Bowie’s “Golden Years” (a posthumous tribute with an unlikely “On Broadway” groove) or the Beatles’ “Everybody’s Got Something To Hide Except Me and My Monkey” (interpolated into a live version of “Poor People’s Store,” his populist “jingle” for an imaginary bargain basement outlet).

Russell’s Shinyribs have recorded five albums since starting out as his “solo” side project, starting with 2010’s “Well After Awhile,” followed by “Gulf Coast Museum” (2013), “Okra Candy”

(2015), 2017’s award-winning “I Got Your Medicine,” and the holiday project “The Kringle Tingle” (2018). The band’s impending release, “Fog & Bling,” set to be released June 14, 2019, came to fruition with demos Kevin started in his backyard studio, with Los Lobos’ Steve Berlin providing some of the horn arrangements.

The conceptualization of “Fog & Bling” derived from discussions between Russell and beloved Austin bassist and producer George Reiff when the two conceptualized taking Russell’s home recordings and building on top of them to see what would come of it. After Reiff’s passing in 2017, Russell worked with David Boyle of Church House Recording Studios to piece together the various recordings and compile them into an album.

When asked to describe the new record, Russell responded in his true, eccentric fashion, “Time capsule opened in the presence of poets leading clergy to a field of wine drunk hippies parading half-nude behind a cattle drive. It’s multiple radios lost in time crossing signal paths. It’s stained pages of books with dead flowers and moths pressed between its pages. It’s grackle’s feathers festooning the hats of dancers sliding slowly across a wooden dance floor. It’s all that and more than I can even begin to conjure.”

Russell’s parents were both music lovers, his father teaching him his first guitar chords, “then pretty much letting me go my own way.” As a teenager, he went through a hard-core punk phase, attracted to west coast acts like Minutemen, Hüsker Dü and Gun Club, followed by an alternative college fascination with R.E.M., the dBs and the Replacements.

“I was raised in an era where there were no rules, where marketing and specialization hadn’t yet become the status quo,” Russell says of his vast musical canvas. “I think of radio as playing all styles of music; everything is up for grabs. I never wanted to play just one kind of music. Honestly, I don’t know how to do anything else. I love mashing things together you wouldn’t expect, like a donut taco.”

The past flows through Russell’s aesthetic sensibility to become something, well, Shiny and new.

“On a more linear line I hear it as a move towards the never-ending goal of merging great songs with great performances,” says Russell. “In the world of music there are great songs and great performances. Rarely do the two meet. But, this is the best we can hope for when it does happen. These are the colors I am always working with. I use my own Dr. Suess meets James Joyce personal poetry to give it a structure to live within. These songs are, as I listen back, deeply personal meditations on my life. From my adolescent, disaffected years of angst, angry at the world, through my naive 20s into my depressed 30s into my melancholy, longing 40s I walk with this group of songs gracefully into my 50s a hopefully wiser, gentler, more understanding man. I feel like I have never been better as a songwriter and singer. I cherish my gift as a bringer of song.”