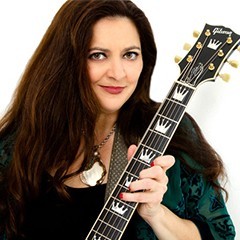 Shelley King is royalty in Texas. As a celebrated singer, songwriter and band leader, her live shows are fun musical parties. Featuring rich, soulful vocals, her songs take you on a musical journey from California to New Orleans, Texas to Tennessee, and across musical genres, two -step to zydeco, blues to bluegrass, from the church to the dancehall.

Shelley has won numerous Austin Music Awards including “song of the year” and “roots rock band of the year”. As a songwriter, her songs have been covered by Marcia Ball, Nancy Sinatra and Lee Hazelwood, Austin legend Toni Price, and many other folk, rock and country acts.

Shelley has released nine CDs of original music encompassing Americana, rock, country, folk, blues, and gospel. She performs regularly for standing room crowds at venues as varied as house concerts to large international festival stages and toured over a million miles all over the world.  She has appeared on Austin City Limits, the longest running music show in television history.

Shelley looks forward to seeing you at the shows and around the ship.