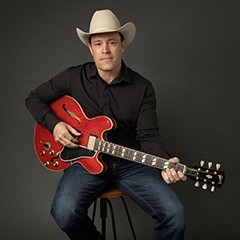 At first, Seth James’ story reads like plotlines have gotten their wires crossed or translations muddled: Could a working cowboy from deep West Texas really be a rock-and-soul roots funk master, educated by the blues?

One listen to James’ new album Different Hat proves the answer is implicitly––resoundingly––yes.

“A lot of those songs sounded like they were from people who worked hard,” says James of the blues he found as a kid in the middle of the Texas plains. “I was just a long way from anything. But the language was simple and romantic in a way that I could understand.”

Music––especially the blues––has a history of jumping through generations, continents, and races thanks in large part to old roots that are gnarled, broad, and strong enough to bust through crowded city sidewalks––and lonely mesquite-pricked pastures. Working cattle on his family’s ranch in King County, James wasn’t inundated with pop culture like other 90s teenagers. He was isolated, and if he wanted music, he’d have to dig. “There’s not a radio on a horse,” James says with a soft laugh. “I was musical, but music didn’t seem like it was everywhere. I was always hunting for it.”

James found Muddy Waters and Lightnin’ Hopkins––then Booker T. & the MGs, NRBQ, Delbert McClinton, and ultimately, a sound entirely his own. A couple of decades ago, he emerged with an easy voice that can croon and soul-shout, campfire storytelling chops, and moody, virtuosic electric guitar playing capable of blistering rides, New Orleans drama, and roadhouse funk. His new album, Different Hat, puts all of that and more on confident display. Produced by Kevin McKendree, the record runs wry country folk, organ-soused trios, and more Americana riches through an unapologetic blues filter. Different Hat also firmly cements James’ place as a preeminent torchbearer, still influenced by what shaped him as a kid. “There was nobody there to stifle me or tell me not to listen to this or that,” James remembers. “It was always just about the way it made me feel.”

James has spent his life discovering and proving what music can do, not just artistically, but when it comes to something as ordinary and universal as Saturday night. “I don’t want to do a good job so that I can be successful and sell more records,” James says. “Don’t get me wrong––that would be great, too. But that moment where everyone is together, their glasses cheers-ing while they shake off the blues a little bit––I want to be part of that.”