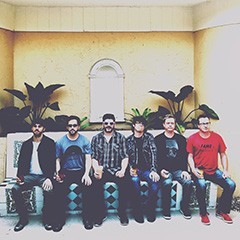 The critically acclaimed collective have found their sweet spot. Now four albums deep, Mingo has honed its sound, rubbed shoulders with musical idols, and delivered powerhouse live shows to crowds of thousands across the country  and globe in the years since the band’s inception in a tiny dorm room in Denton, Texas.

Mingo’s fourth full-length record, the aptly-named On Time blends punchy horns and gritty grooves with greasy funk to create sounds steeped in both modern pop and sixties soul sensibilities, that transcend both era and genre. “My first love is classic sixties soul, funk, and Motown,” says Roger. As the band has grown, this early love affair has become a bigger part of Mingo’s musical landscape.

“It’s clear that even with the revival of soul and funk music in recent years, only a few bands can match the vocal intensity Blevins offers combined with the instrumental prowess of his bandmates.” – jambands.com