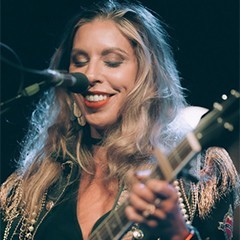 Liah Alonso, musical amazon, wields her guitar wherever she goes and lights up the room with her smile. Her memorable lyrics and catchy melodies evoke a quirky loveliness you can’t help but adore. Although she has been known to write a fierce, tear-jerking break-up song now and again, she much prefers to portray the irony of our society and the strange times we are living in with humor and soul. Memorable songs like “The High Heel Blues”, “Self-Help Guru Goddess”, “Unsolicited Dick Pic”, and “Ser Mujer” will stay with you forever.

Liah tours and records internationally and releases music in multiple languages. Starting her music career as a subway busker in New York City, Liah has gone on to share stages with Tom Morello, Jackson Browne, La Gusana Ciega and others. Most recently, Liah performed at SXSW, The Pepsi Center Stadium in Mexico City, City Winery in New York, House Of Blues in New Orleans and special events in Sweden and Barcelona.

Every time you see Liah Alonso play you’ll feel the rush of live music again. Her energy and spontaneity on stage are contagious. She is a multi-dimensional artist whose songs and stories reach in and touch your soul.