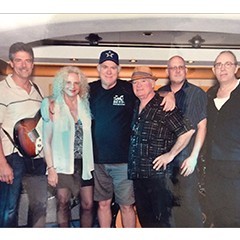 Trish Anderson and her Bluz House Rockers host the late-night jam on the cruise. Designed to give cruisers, as well as professional musicians on board, the opportunity to perform (usually two songs) with the band backing them up. Cruisers sign up and perform in the order in which they signed up, and pros can come up and jam without signing up. We know there are a lot of talented cruisers on board! Bluz House is the ideal host for the jams. Based in upstate New York (Albany/Saratoga region), their core members are honored to have been inducted into the New York State Blues Hall of Fame. In addition to their original music, their broad repertoire of cover tunes, ranging from Sinatra to the Allman Brothers, and their ability to sing lead and harmonies, provide strong support for whatever songs cruisers wish to perform.

Trish was introduced by host Dennis Bono at the Southpoint Casino showroom in Las Vegas as “upstate New York’s Janis Joplin,” but we all know there was only one Janis. Her original song “Three Dollar Bill” went to number two on Denmark’s pop 100 charts. Many band members are singer-songwriters, including Rick Rourke (sax, harmonica, guitar and vocals) who orchestrates each nightly jam. His original song “Good Food” has been featured on the Today Show. Tony Perrino on Hammond B-3 is a singer-songwriter and producer who has performed with the Allman Brothers and the Toler Brothers. Legendary Texas drummer Danny Cochran keeps the beat. Last year, keyboardist Matt Donnelly wowed the audience at Pianarama. Cruisers are encouraged to perform or just hang out and enjoy great music at the nightly jams.